It has been a very productive month for the Nevada State Prison Preservation Society.

On Aug. 23, Glen Whorton and Maurice White met with the Deputy Director of the Department of Corrections, Harold Wickham. We presented an application for work permits for three projects.

We need to finish the wall opening between A and B Blocks so tours can access the entire Cellhouse and the execution chamber. Secondly we need to remove the gate on the front of the Culinary because it is a trip hazard. Lastly we need to remodel the restroom in the Courthouse to meet ADA standards.

This application has to be presented to the State Public Works Division by the NDOC because NSP belongs to Public Works. This is one of the bureaucratic hoops that we have to jump through to get things done.  It’s all complicated.

No more TB testing for volunteers

Also at this meeting there was a discussion regarding the requirements for volunteers from NSPPS.

Because there are no inmates in NSP, Mr. Wickham agreed that it was no longer required that our volunteers complete the half day of inmate rape prevention training AND we no longer have to get TB Testing!

This is great because it makes it easier for people to volunteer. If this has been an issue for you, get involved now. Call Terry Hubert at 775-354-7745 and volunteer for the Yard Labor Crew or as a tier runner.  We gave Mr. Wickham a draft administrative regulation that will memorialize these decisions. 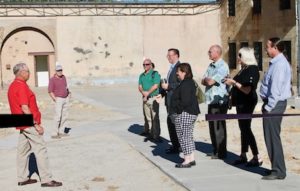 The Board met on Aug. 19 with state and community leaders to discuss and plan for the future of the Nevada State Prison. Assembly Bill 377 from the 2015 Legislature provided a process to determine the disposition of NSP once the NDOC is completely out of the facility.

NDOC has made a budget request to build a new maintenance area for the Warm Springs Correctional Center.  The maintenance building at NSP is the last activity for the department.

The consensus of the group stated that: 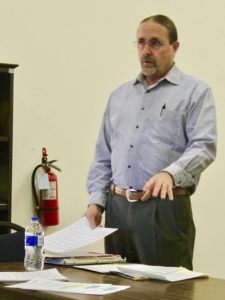 We presented a project list that we believe is necessary for the opening of tours:

Maurice White organized a two day work event at NSP on Aug. 30 and 31. A huge amount of weeds were gathered and loaded into Lee Perks’ new dump trailer. Joe Kinsley and Maurice located and sealed the holes in the Culinary where the birds were getting in and expiring.

We have a new treasurer for the organization. Debbie Reed had to resign as her family’s geography means that she will be traveling extensively and will not be available.

Christine Evans has agreed to take on the treasurer duties.  She is a former business manager and a Marine Corps veteran. Presently she is the law librarian for the Warm Springs prison. We are excited to add her to our board and our executive committee.

Opening on the board

We have an opening for a member on our board at the present time.  Robin Bates had to resign from his position as vice-president because of his workload at the Legislature and the Parole Board.

We are looking for an individual with an interest in either our newsletter/Facebook, membership development, or grant writing.  If you are interested in serving on the board then give Glen Whorton a call at 775-722-0394.